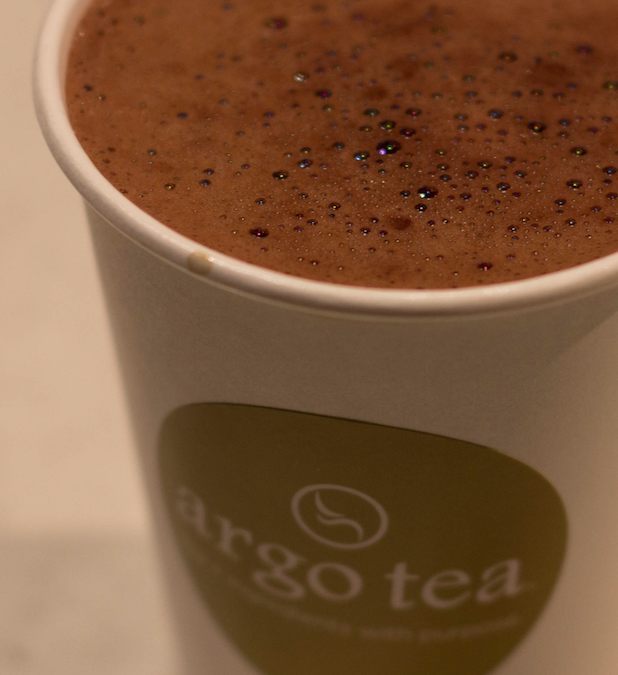 Seasonal Favorite ‘Pumpkin Chai’ Returns and Fans Can Get a Free 12oz Cup on Saturday, Oct. 1

Also, making a return to Argo Tea’s menu this fall is the café’s popular Pumpkin Chai. The caffeine-free seasonal favorite combines sweet and spicy rooibos chai with the smooth flavor of pumpkin. To commemorate its return, Argo Tea is offering guests a free small (12 oz.) Pumpkin Chai on Saturday, Oct. 1 from opening until noon at participating Argo Tea cafés.

“As the days grow shorter this fall, Argo Tea is offering guests a new way to start their mornings—with all-natural energy available on-the-go,” said Kari Ginal, Vice President of Marketing, Argo Tea. “We’re confident that the Cocoa Mate will become a crowd favorite, much like our signature Pumpkin Chai.”

Argo Tea proudly sources the best ingredients from around the world, including handpicked, loose-leaf teas, to create a variety of innovative signature beverages that blend a perfect balance of smart nutrition and craveable taste.

Since brewing its first cup of tea in 2003, Argo Tea has quickly become a household name and leading multi-channel, branded beverage company. Its ready-to-drink teas in Argo Tea’s iconic bottles are now available in over 30,000 outlets nationwide through partnerships with premier retailers that value its brand-defining commitment to quality, sustainability and healthy living. With nearly 50 Argo Tea cafés globally, it has established a brand building marketing platform that serves over 10 million cups of tea annually fueling its innovation. Argo Tea’s menu includes all natural-tea based signature drinks, over thirty varieties of loose-leaf teas, premium coffee, fresh-baked pastries, specialty foods, and a selection of tea ware and accessories.

Set to Open in Early 2017, the Largest New Distillery in America Demonstrates Strength of its Custom Whiskey Production Program; Begins Creating Bourbon for its own Brands

Bardstown, KY (September 14, 2016) – After nearly three years in development, the Bardstown Bourbon Company (BBCo) today achieved another major milestone with the start of commercial production. The Company also announced that it’s already preparing to expand because its collaborative whiskey, bourbon, and rye distilling program is sold out, based on the current capacity of the distillery. The distillery’s 1.5 million proof gallon capacity can be expanded to more than 6 million proof gallons within the current design, by adding additional equipment, which allows BBCo. to take on new customers in 3rd quarter 2017.

“The Bardstown Bourbon Company is reshaping the American whiskey market,” said David Mandell, President & CEO. “The success of our Collaborative Distilling Program demonstrates the massive demand for custom, authentic, Kentucky whiskey products. We’re excited to begin producing bourbon for our customers and our own brands.”

The BBCo distillery plans to open its visitors and events center to the public in early 2017, which will contain one of the largest collections of whiskey in the state of Kentucky. The state-of-the-art whiskey distillery will also include a transparent educational experience and high-end tours and tastings, event space, and eventually, a restaurant and boutique hotel.

To make this all possible, the company assembled one of the most experienced whiskey-distilling teams in the industry, led by Bourbon Hall of Fame Master Distiller, Steve Nally – a 40-year veteran of the spirits industry and the former Master Distiller of Maker’s Mark.

“We’ve turned on the whiskey at the Bardstown Bourbon Company,” said Master Distiller, Steve Nally. “I’m so proud to be starting up this incredible operation in my hometown. It’s a once-in-a-lifetime opportunity, and we’re excited to share it with the world soon.”

Led by Nally, the production team has an average of more than 15 years of experience in the industry, working on world-class brands, including Jim Beam and Maker’s Mark.

The following are BBCo’s production team members and years of whiskey distilling experience: