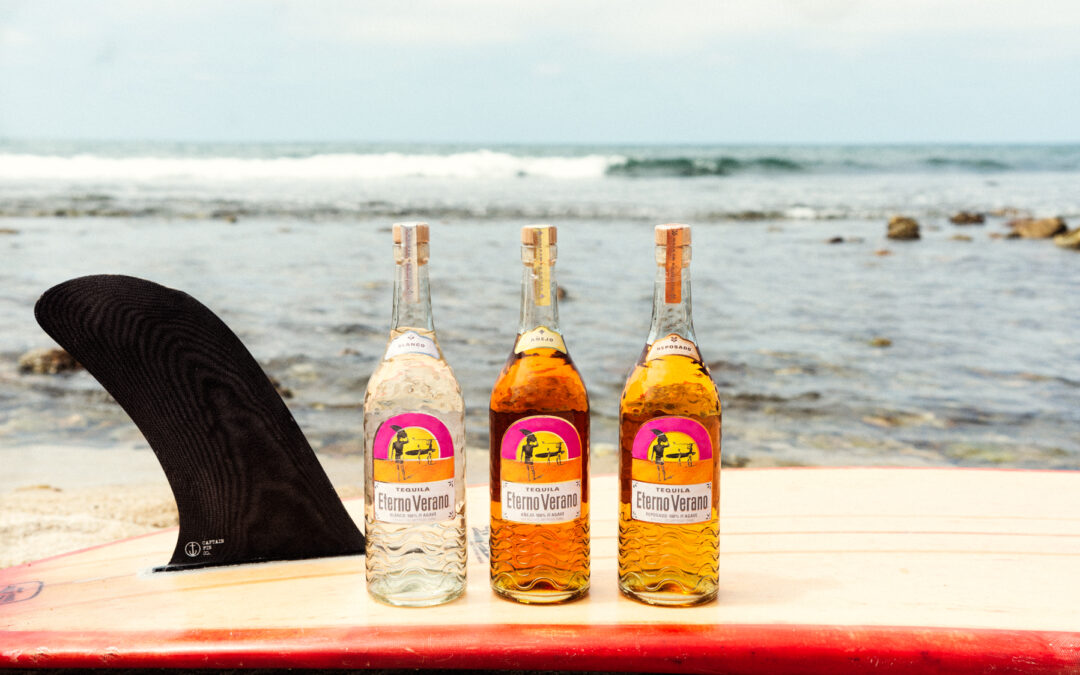 Tequila Eterno Verano Launches with An Ode to the Sun, Sea and Joy of Living

Inspired by the Classic Surf Film “The Endless Summer,” Eterno Verano is A New Ultra-Premium Tequila for Adventurous Souls

Charleston, SC (July 26, 2022) – Today, Tequila Eterno Verano launches a range of ultra-premium tequilas made for adventurous souls. Inspired by Bruce Brown’s classic 1966 surf film “The Endless Summer,” Eterno Verano is for anyone who’s ever wanted to strap a surfboard to a van and head south. The new lifestyle brand embodies the adventurous and wanderlust spirit of the surf culture epitomized in the film. The ultra-premium tequila is meant to be enjoyed in the pursuit of good times, with great friends and perfect waves.

Eterno Verano represents an escape – whether you’re sitting at a desk or have been surfing the same break on repeat – transporting you to the places you dream of. In the film, you embark on a journey with Robert August and Mike Hynson to undiscovered locales like Cape St. Francis, a small village in South Africa, Senegal, Australia, and Hawaii. The search for something unattainable like a perfect wave becomes the journey. This tequila was made for those types of adventurers, in search of perfect waves or clean, smooth tequila.

Eterno Verano pays homage to The Endless Summer film by utilizing a close interpretation of the now iconic movie poster with surfer silhouettes, bright colors, and bold font. “We worked closely with Bruce Brown Films to ensure the casual and fun-loving surf lifestyle from the film showed up in the brand. In fact, the brand name ‘Eterno Verano’ comes from the movie poster used during the original film launch in Mexico – another connection between the brand and tequila,” said Matti Anttila, founder of Grain and Barrel Spirits, which owns the brand.

Eterno Verano launches with a full range of tequila including Blanco, Reposado and Añejo. Eterno Verano is handmade in Tequila, Mexico, by Master Tequilero Arturo Fuentes – also known as The Godfather of Tequila – from 100% Blue Weber Agave grown in both the highlands and lowlands of Jalisco, Mexico. The tequila is bottled using environmentally friendly recycled glass and a natural cork closure for consumers to enjoy consciously.

Now available in three expressions, these tequilas are more attainable than a perfect wave:

Eterno Verano is bottled at 80 proof (40% ABV). All three expressions are available for purchase on the brand website at EternoVerano.com, on ReserveBar.com and is launching this summer in select U.S. markets including Arizona, California, Colorado, Nevada, South Carolina and Texas.

Tequila Eterno Verano is a range of ultra-premium tequilas, including Blanco, Reposado and Añejo made for adventurous souls. Inspired by the classic 1966 surf film “The Endless Summer,” Eterno Verano is for anyone who’s ever wanted to strap a surfboard to a van and head south. Eterno Verano embodies the adventurous and wanderlust spirit of the surf culture epitomized in the film. Eterno Verano is handmade by Master Tequilero Arturo Fuentes – also known as The Godfather of Tequila – from 100% Blue Weber Agave grown in both the highlands and lowlands of Jalisco, Mexico. Eterno Verano Blanco and Reposado have been awarded Silver Medals by the San Francisco World Spirits Competition.

Based in Charleston, South Carolina, Grain & Barrel Spirits develops and scales craft spirits that connect the best artisans to consumers worldwide. One of the company’s core brands is Dixie Vodka, the leading premium homegrown vodka produced in the Southeast and the Official Vodka of NASCAR; one of the fastest-growing craft brands in the United States, Dixie won the prestigious 2019 and 2020 and 2021 “Rising Star” Growth Brands Awards from Beverage Dynamics magazine. Other brands in the Grain & Barrel portfolio include Chicken Cock Whiskey, an historically significant whiskey brand established in Paris, Kentucky, in 1856; Virgil Kane Lowcountry Whiskey; High Goal Luxury Gin, a small batch, ultra-premium gin produced in Charleston; and Elvis Whiskeys, a duo of Elvis Presley-inspired whiskeys. Grain & Barrel has been named to the prestigious Inc. 5000 list of the fastest-growing privately held companies in America three years in a row and is a proud member of 1% For The Planet.