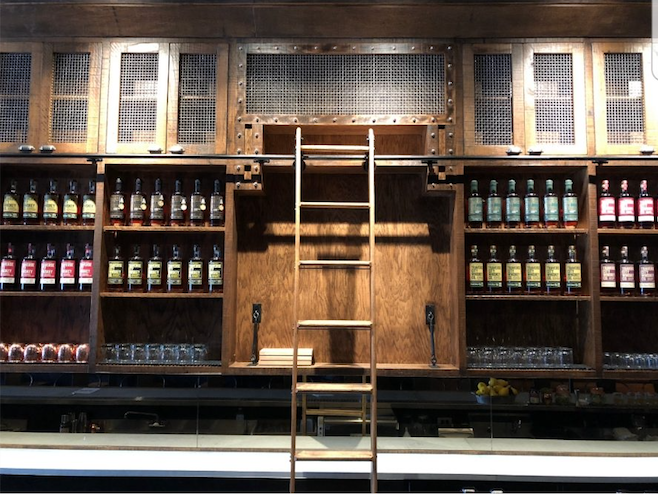 Detroit, MI (July 30, 2019) – Traverse City Whiskey Co. (TCWC), also known as the “Whiskey of the North,” has ventured slightly southeast within the state to open its first-ever Tasting Room in Metro Detroit. Named ‘The Outpost,’ the space is located alongside the already operating Como’s at 22812 Woodward Avenue at Nine Mile in historic Ferndale.The property was acquired by Peas and Carrots Restaurant Group, but the whiskey tasting room will operate as a separate entity.

TCWC has been eyeing The Motor City for some time, as a way to establish a footprint in a major metropolitan area that’s well-recognized for its food and beverage programs, and a stone’s throw from their home distillery in Traverse City, which houses the company’s original tasting room – ‘The Stillhouse.’ The brand plans to offer a “taste of up north” to their Detroit fan base, replicating a rustic vibe, signature whiskey cocktails and, most importantly, northern hospitality.

The company has hired an initial 16 staff members, all from Greater Detroit, to help open and operate the venue. Every person, from bartender to hostess, will undergo brand-specific training, including Whiskey 101 and Whiskey 201, that breaks down everything from the TCWC history to the specific mash bill of each whiskey expression.

Entry to ‘The Outpost’ can be accessed on the opposite side of the restaurant patio, off of Woodward Avenue, or through the rear of the building. In warmer months, a garage door that acts as the tasting room’s front window, can be lifted to give guests an open-air feel – like on the bay of Lake Michigan. Directly inside, and looking up, is a suspended custom-made chandelier constructed of whiskey barrel staves which matches other used whiskey barrels strategically placed throughout the tasting room.

Deeper within the space, thirsty guests can choose from among 16 barstools or 12 high-top tables, which fill the remaining Northern Michigan-themed space. Branded leather-bound stools, tinted light fixtures and a floor to ceiling back bar further detail ‘The Outpost.’ An interior door, not far from the tasting room’s merchandise corner, will connect the two spaces, but the atmosphere and ambiance of each property will be distinct and unique.

The brand’s full portfolio of whiskey bottles will be available to taste and purchase on-site, which include: Straight Bourbon XXX Whiskey, American Cherry Edition, North Coast Rye, Port Barrel Finish, Barrel Proof Bourbon and multiple exclusive releases that are only available in Traverse City and now at ‘The Outpost.’ Situated in the “Cherry Capital of the World,” the brand recently introduced all-natural Premium Cocktail Cherries to its lineup, which are currently available at Meijer locations nationally and online via Amazon. The cherries will be used to enhance the Tasting Room’s signature cocktails and sold alongside the whiskey by the jar.

Food will also be available from a condensed Como’s menu, made in the neighboring kitchen. The signature TCW Burger, coined ‘The Best Burger on the Block,’ is made of a double beef patty topped with American cheese, whiskey onion and whiskey aioli. Bar bites like White Cheddar Curds, served with smoky tomato sauce, and Whitefish Dip made with charred apple, mustard, scallion and celery are also available for order. Elevated items like the Cheese Board and Charcuterie Board, the latter of which includes a Cherry-Whiskey Compote, round out the menu providing assorted options for any palate.

Traverse City Whiskey Co. isan independent and locally owned distilled spirits company based in Traverse City, Michigan, that’s dedicated to producing approachable premium to super-premium whiskey and bourbon. Known as “The Whiskey of the North,” the upstart company draws upon its early family roots in the distilled spirits industry dating back to the late 1800’s, sourcing all grains from the Midwest.

Traverse City Whiskey Co. is a proud member of the Distilled Spirits Council of the United States (DISCUS).