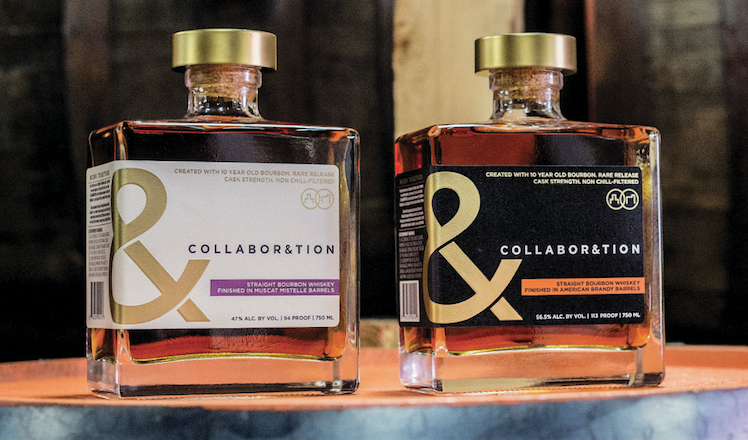 Bardstown, KY (September 13, 2017) – The Bardstown Bourbon Company (“BBCo”) and Copper & Kings American Brandy Company (“C&K”) announced today the release of “Collabor&tion,” two distinct products made with 10-year-old straight bourbon whiskey – one finished in Copper & Kings’ American Brandy barrels and the other in Muscat Mistelle barrels, for more than 18 months in the Copper & Kings basement maturation cellar. The project is intended to embody the spirit of friendship and partnership, and celebrates great craftsmen working together to produce exceptional products as kindred spirits.

“Collabor&tion is the first of many original releases from the Bardstown Bourbon Company,” said David Mandell, President & CEO, the Bardstown Bourbon Company. “We’ve built our company by working together with many of the leaders in the spirits industry, and our philosophy of collaboration is reflected in the brands we’re developing, the companies we partner with, and the Kentucky communities that we represent.”

Started in late 2015 by two Kentucky-based distilleries, Collabor&tion is a culmination of nearly two years of work. Steve Nally, Bourbon Hall of Fame Master Distiller for BBCo, and Brandon O’Daniel, Head Distiller for C&K, hand-selected the bourbon for the project, meticulously blended it until it achieved the right flavor profiles, and chose the barrels for the finishing process.

“Coll&boration is not made to be collected; it’s far more special than that. Its heart is friendship, enjoying company, and bringing out the best in each other,” said Joe Heron, President & CEO of Copper & Kings American Brandy Company. “It is an exceptional bourbon that was made by friends for friends and is designed to be enjoyed with friends.”

“Exceptional bourbon will always carry beautiful dark fruit notes (figs, raisins, dates) as well as apple and pear to complement the classic honey, spice and butterscotch. Aging in brandy barrels not only accentuates these notes – it layers more on top of that foundation to create an incredibly rich, smooth and complex whiskey,” says Bardstown Bourbon Company Master Distiller Steve Nally. “I’ve been doing this a long time, and this is an amazing spirit – something I will share with my good friends with real pride.”

“A Mistelle barrel is a unique vessel. Mistelle is unfermented grape juice (in this case Muscat) fortified with un-aged brandy (Muscat eau-de-vie) and then aged in bourbon barrels for 18 months. The empty barrels are deeply and highly caramelized with the grape sugars and fruit essences. The whiskey exiting these barrels is pure joy. A completely novel sensory experience; deep, deep rich whiskey – very soft and supple, mellow, and the taste goes on forever. The whiskey notes are amplified by a softness and smoothness that is singular – to say the least. I could literally sip this for the rest of my life,” said Brandon O’Daniel, Head Distiller of Copper & Kings.

Collabor&tion is a very limited release that’s only available in select Kentucky retail stores, at the BBCo and C&K gift shops, and a small selection of fine retailers across the USA.

Raised on a farm in Jessamine County, Brandon O’Daniel is a proud alum of the University of Kentucky’s School of Horticulture. Over the past several generations, the O’Daniel family name has become associated with wine making and viticulture in the Commonwealth. Brandon did not stray from this tradition. While at UK, he earned both his BA and MS in Plant and Soil Sciences. His undergraduate work led him to focus on horticulture management. O’Daniel’s graduate studies emphasized research in Viticulture and Enology. As a winemaker and vineyard manager, he honed the skills needed for his current and next challenge as head distiller at Copper and Kings, where he is proud to be a part of what he believes is the next big thing in the spirit industry.

Steve Nally is the Master Distiller for the Bardstown Bourbon Company. With more than 40 years of experience in the whiskey industry, Steve is heading the development and production of the Bardstown Bourbon Company’s distillery. Steve is a member of the prestigious Bourbon Hall of Fame and the former master distiller of Maker’s Mark for more than 18 years. After retiring from Maker’s Mark, Steve was recruited to build Wyoming Whiskey, which produced the first legal bourbon west of the Mississippi. At Wyoming Whiskey, Steve was the master distiller and also oversaw the construction of the company’s distillery. Steve and his family returned to Kentucky in 2013 to join The Bardstown Bourbon Company.

BBCo is also developing a destination experience with a unique “Napa Valley” style campus featuring a state-of-the-art whiskey distillery, transparent educational experience, integrated visitors center, event space, vintage spirits and whiskey library, bar, and restaurant. The company also plans to develop a boutique hotel and convention center on the property. The Company anticipates announcing an opening date for its visitors’ center in the near future.