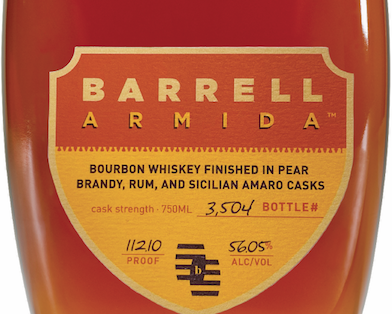 Armida began as an experiment that sent the BCS team around the world in search of flavors and aromas they felt excited to find in bourbon. More than a year later, they’ve achieved a whiskey which bourbon enthusiasts will crave. The ripe, floral pear notes provide a soft entrance into a whiskey that’s adorned with hints of spice and arid citrus derived from the Amaro casks and the toasty bourbon itself. This mélange of flavor is framed by the ripe, tropical sweetness found in rum finished whiskeys. Armida is a journey for the palate: from a brisk northern orchard to an ancient island, it ends up exactly as intended – an immensely complex and satisfying whiskey.

“With Armida, we set out to finish and blend whiskeys that tease the intended subtle flavors from the edges of perception into the forefront,” said Founder Joe Beatrice. “We’re passionate about exploring opportunities to source and blend outside the box, and to showcase the world’s most exciting spirits. Armida helps to further advance our vision of the next chapter of whiskey in America.”

Joe is intimately involved with every step of the production process, using his exceptional palate to choose and create great spirits alongside Tripp Stimson, the Chief Whiskey Scientist and Director of Distillery Operations, who joined BCS in 2017 after having spent nine years with Brown Forman Corporation. National Director Will Schragis, an experienced sommelier, rounds out the team with an active role in product development.

Founded in 2013 in Louisville, Kentucky, BCS selects and blends products that explore different distillation methods, barrels and aging environments, and bottles them at cask strength. Every batch is produced as a limited release and has a distinct flavor profile. BCS’s extensive stocks of high-quality casks mean they can craft extraordinary blends that maximize the nuances of each ingredient. Creative finishes, a liberated approach to blending, and a deep-seated commitment to releasing each whiskey at cask strength and without chill filtration guides every product release.

BCS also offers special releases that allow its creativity to flourish including: Dovetail American Whiskey, which was awarded the “Chairman’s Trophy” at the 2020 Ultimate Spirits Challenge, theInfinite Barrel Project, American Vatted Malt, and the Barrell Craft Spirits Line, which was named “Best American Whiskey of 2018” by whiskey authority Fred Minnick in Forbes. The team anticipates that Armida will join this shortlist of regular offerings.

Barrell Armida Bourbon Whiskey was bottled at 112.10 proof (56.06% ABV) and is available at select retailers within the brand’s current 45 U.S. markets and online via the BCS website at www.barrellbourbon.com. For this special release, only 3,700 total 750ml bottles will be available, with a suggested retail price of $89.99.