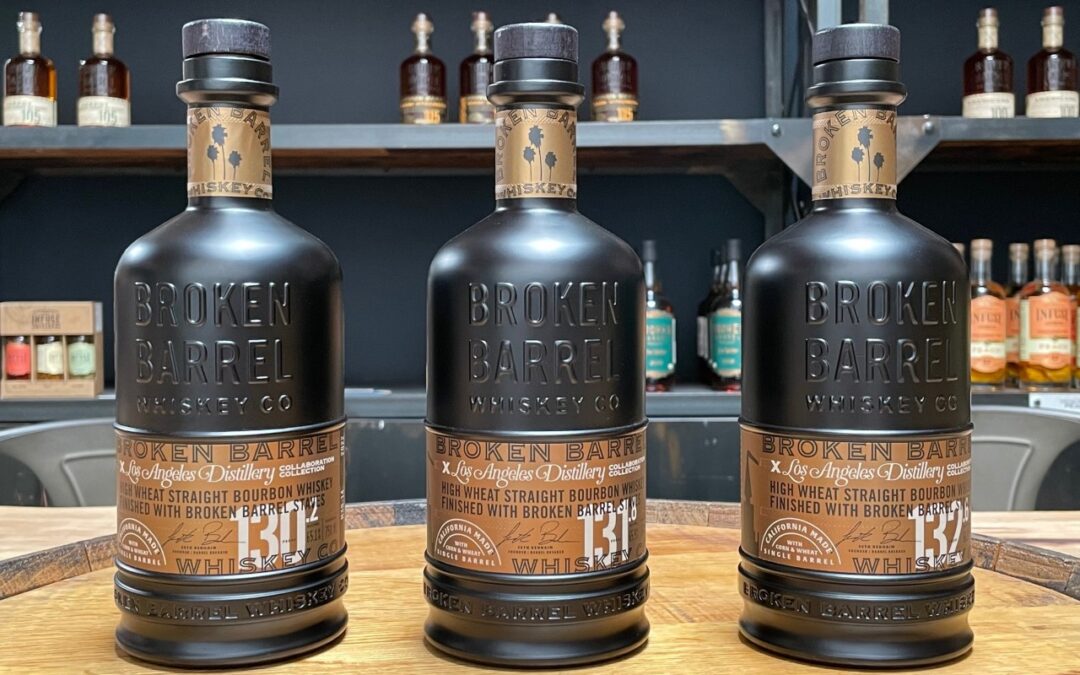 Broken Barrel’s unapologetic whiskeys are known for exemplifying the impact a non-traditional barrel finishing practice has on a final whiskey – specifically by using broken barrel staves from multiple combinations of barrel types in tandem. This limited-edition release marks a new journey for Broken Barrel Founder & CEO Seth Benhaim, who approached Total Wine & More and Dr. Lewis Harsanyi of LAD earlier this year about a collaboration.

Benhaim hails LAD as one of California’s most impressive distilleries – a true state-of-the-art facility led by Dr. Harsanyi, who for the past 35 years has sold, imported and built brewing and distilling systems to some of the industry’s most acclaimed producers. In 2014, Harsanyi founded his own distillery, which today houses one of the most breathtaking and sophisticated distilling operations in the craft spirits industry.

For this special release the two companies selected three, five-plus year-old wheated bourbon barrels. Each has been aging in new charred Hungarian white oak, selected specifically by the Hungarian-born Dr. Harsanyi, whose origins and extensive knowledge of oak barrels insists on their quality and distinct profile. Using that heritage to his advantage, Dr. Harsanyi customized to his own specifications the densest, top quality new Hungarian white oak barrels.

“Hungarian barrel staves are far denser (30-34mm) than American staves (25-28mm). For this project, I developed custom 200L elongated barrels and then carved wood grooves into the staves of each to increase the wood surface area (+68%) and impart more flavor,” said Harsanyi.”

Benhaim has experience sourcing both liquid from multiple distilleries and barrels from around the world, and has mastered blending multiple broken barrel cask staves in tandem to create, develop, and refine the flavor, feel and finish of his limited-release whiskeys. For this expression, he suggested using Tokaji-aszu staves, (known as the “king of wines and wine of kings”) as well as Harsanyi’s favorite, ex-single malt barrel staves, to reveal a last and final sweet-leathery kick to the bold cask strength wheated bourbon. During the finishing process, the barrels were emptied into their own drums before adding broken barrel staves to finish the whiskey, in this case for just a few months.

“Our personal connection and the combination at every step of the process is something all whiskey enthusiasts will appreciate, enjoy and share,” said Benhaim. “This special collaboration was made exclusively for our best customers in our home state of California.”

The 2022 Distillery Collaboration is now available at Total Wine & More locations throughout California, and within both the Broken Barrel gift shop and L.A.D. gift shop. The expression features a mash bill of 51% corn and 49% wheat and an Oak Bill™ (Benhaim’s term to denote the combination of various barrel staves used), of 80% Tokaji Aszu staves and 20% Ex Single Malt staves. The liquid was bottled at 130-132 proof (65%+ ABV) and has a suggested retail price of $110.

To date, Benhaim has purchased whiskey barrels from over a dozen countries. In addition to Broken Barrel’s core portfolio (California Oak, Small Batch, Heresy Rye and Cask Strength), he will have released 25 unique whiskeys with varying Oak Bills by year’s end. Past limited-releases have incorporated various types of barrel staves including: Barbadian Rum, French Oak, Cognac, Armagnac, Islay, Maple, Mizunara and Amontillado. Individually, these types of oak barrels are not typically used on 95% of all bourbon or rye whiskey produced, and rarely if ever are three types of oak used at the same time to finish American whiskeys.About Broken Barrel Whiskey Co.

With a vision to produce luxury brand spirits, Los Angeles Distillery carefully planned and directed an innovative spirit-making process – from the selection of the ideal tree for our casks, to the superb composition of ingredients for our spirits, to our modern distillation techniques for consistent results – so that we may bring you excellent spirits. LA Distillery produces gin, rum, vodka, and whiskey; its whiskey portfolio includes American Single Malt, Rye Whiskey, and a variety of bourbons. All are available for purchase at www.lawhiskeystore.com