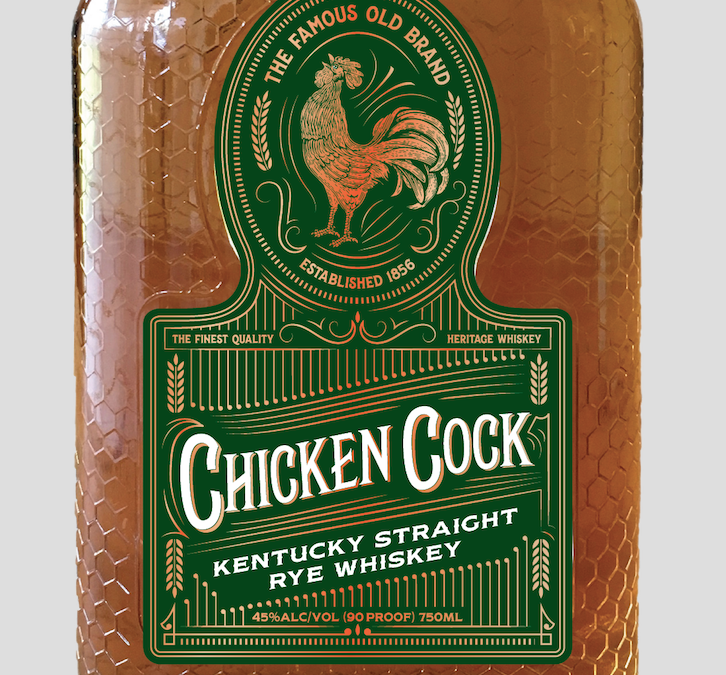 BARDSTOWN, Ky.(April 7, 2020) – Grain & Barrel Spirits’(“G&B”) has released Chicken Cock Kentucky Straight Rye Whiskey in select markets, “The Famous Old Brand’s” first Rye in more than 70 years. The introduction follows the fall 2019 launch of the brand’s anchor expression, a Kentucky Straight Bourbon Whiskey. The reintroduction of a straight rye whiskey signals a return to pre-prohibition times when the classic spirit was more prevalent, while also honoring the brand’s history and heritage.

Made in partnership with the Bardstown Bourbon Company as part of its collaborative distilling program, the new Straight Rye Whiskey was 100% distilled, aged, and bottled in the Bluegrass State. It’s a beautifully balanced non-chill filtered 95% rye whiskey, which features a caramel color with a hue of dark orange. The nose reveals a tremendous complexity of spices including pepper and cinnamon, with a hint of dryness and slight overtones of citrus and oak. A creamy, almost buttery mouthfeel is complemented by vanilla and butterscotch, followed by a long, slow peppery finish with a hint of sweet honey. At 90 proof (45% ABV), there is a slight, welcome heat. Like the new KY Straight Bourbon, the KY Straight Rye is bottled in a Prohibition-era Chicken Cock replica apothecary-style bottle.

“The number one question I’m asked since resurrecting Chicken Cock Whiskey is, where can I find it?” said Matti Anttila, founder of Grain & Barrel Spirits. “In the beginning, we were limited geographically by liquid so we were forced to allocate to a small group of select markets. Now, several years into the comeback, we’re able to broaden our distribution with our two top quality, everyday expressions – first, our Kentucky Straight Bourbon and now our Kentucky Straight Rye. Both of these will be the cornerstones of the brand as it rolls out nationally throughout 2020.”

Established in 1856 in Paris, Kentucky (10 years before Jack Daniels), Chicken Cock rose to fame as the house whiskey at The Cotton Club, one of Prohibition’s most legendary speakeasies. Known as “The Famous Old Brand” and “The Whiskey in a Tin Can,” Chicken Cock was smuggled into the Club in sealed tin cans, then ceremoniously opened table-side. After Prohibition, the brand enjoyed a resurgent couple of decades before a distillery fire just after World War II put it out of business. In 2012, Matti Anttila rediscovered the brand and set out to resurrect it to its Prohibition-era glory. Master Distiller Gregg Snyder was enlisted to provide the knowledge and experience needed to help achieve that goal. Snyder’s résumé includes distilling, cooperage, and executive positions with Brown-Forman, Austin Nichols, as well as board positions with the Associated Cooperage Industries of America, Kentucky Distillers’ Association, and others.

Founded in 2012 by Matti Anttila, Grain & Barrel Spirits is an award-winning craft spirits company at home in the Southeast with production and sales partners around the world. The company was recently named to the Inc. 5000 list, coming in within the top 25% of America’s fastest-growing, independently owned businesses. In addition to pre-Prohibition favorite Chicken Cock Whiskey, wholly owned brands include Dixie Southern Vodka, the largest premium craft vodka produced in the Southeast, and The Endless Summer Spirits Company. Please visit https://www.chickencockwhiskey.com and follow on Instagram @chickencockwhiskey and Facebook