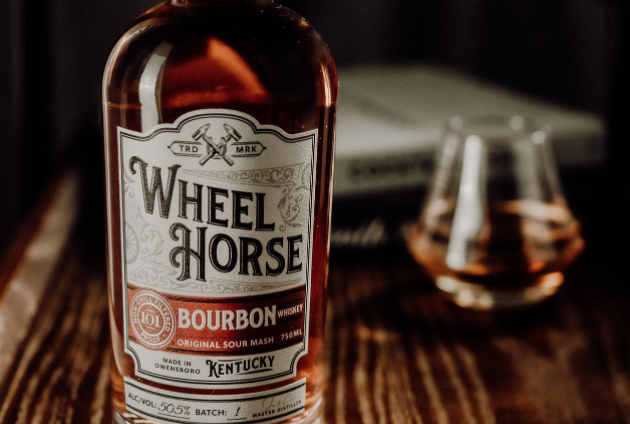 Wheel Horse Bourbon was aged between two and four years at Owensboro Distilling, the westernmost distillery along the famed Kentucky Bourbon Trail. Crafted by Master Distiller Jacob Call, a third-generation distiller and seventh-generation Kentuckian, Wheel Horse Bourbon is a Straight Bourbon whiskey made from a mash bill of 70% corn, 21% rye, and 9% malted barley. This whiskey is produced through the traditional sour mash method, distilled in copper stills, and matured in hand-selected, 53-gallon, charred American oak barrels. It is non-chill filtered and bottled at 101 proof (50.5% ABV).

“It has been an honor to carry on the 135-year tradition of this historic distillery, which was recently renamed so we could better honor its storied past,” said Jacob Call, Master Distiller at Owensboro Distilling. “We reopened for production in 2016 after being closed for more than seven decades, and Wheel Horse was one of the first national brands to show off our whiskey. We’re excited to partner with Latitude Beverage again on the release of Wheel Horse Bourbon. You’re going to love it.”

“Launching Wheel Horse in partnership with Owensboro Distilling has been an exciting endeavor,” said Terry Lozoff, Latitude Beverage’s Spirits Director. “Wheel Horse Rye has quickly gained a loyal following and has received several accolades, including a 94 point rating from the New York International Spirits Competition. Owensboro Distilling is making fantastic whiskey, and this new Bourbon is the perfect example of the high bar they’ve set as they fully re-enter the Kentucky Bourbon scene.”

Wheel Horse Bourbon Whiskey is available in California, Colorado, Connecticut, Delaware, Illinois, Kentucky, Maryland, Massachusetts, Minnesota, Missouri, New Jersey, New York, Rhode Island, and Tennessee. Also, after quickly selling out of batch one, the second batch of Wheel Horse Rye Whiskey will be available in these markets in early November. Both expressions have a suggested retail price of $27.99 for a 750ml bottle, making both the Bourbon and Rye an affordable luxury for whiskey lovers.

Latitude Beverage is the innovative, Boston-based company behind a portfolio of national wine and spirits brands, including 90+ Cellars, Iron Side, Mija Sangria, Magic Door Vineyards, Corte Fiore, Steel Dust Vodka and Wheel Horse Whiskey. The company was founded in 2007 by Kevin Mehrawho saw an opportunity to make high-end wine more accessible by purchasing oversupply from highly rated wineries across the globe, bottling the wine under his own labels, and selling it to consumers at a lower price. This unique business model, based on the centuries old function of the négociant, became the foundation for 90+ Cellars. The company is now recognized as one of the fastest growing wine companies in America (IMPACT Hot Brand 2015, 2016, 2017). For more information, visit ninetypluscellars.com.

Owensboro Distilling Co. (a subsidiary of Green River Distilling Co.) is the fourth largest independent Bourbon distillery in the United States, located in Owensboro, Kentucky. Founded by John W. McCulloch in 1885, DSP-KY-10 received national and international acclaim for its whiskey. The distillery endured fire, Prohibition, multiple owners, and a period of decline to reemerge today. Under the leadership of Master Distiller Jacob Call, the distillery produces 90,000 barrels of Bourbon and rye a year for bulk, private brand, private label partners. The distillery is the Westernmost spot on the Kentucky Bourbon Trail and welcomes visitors from around the world. For more information, visit www.greenriverdistilling.com.