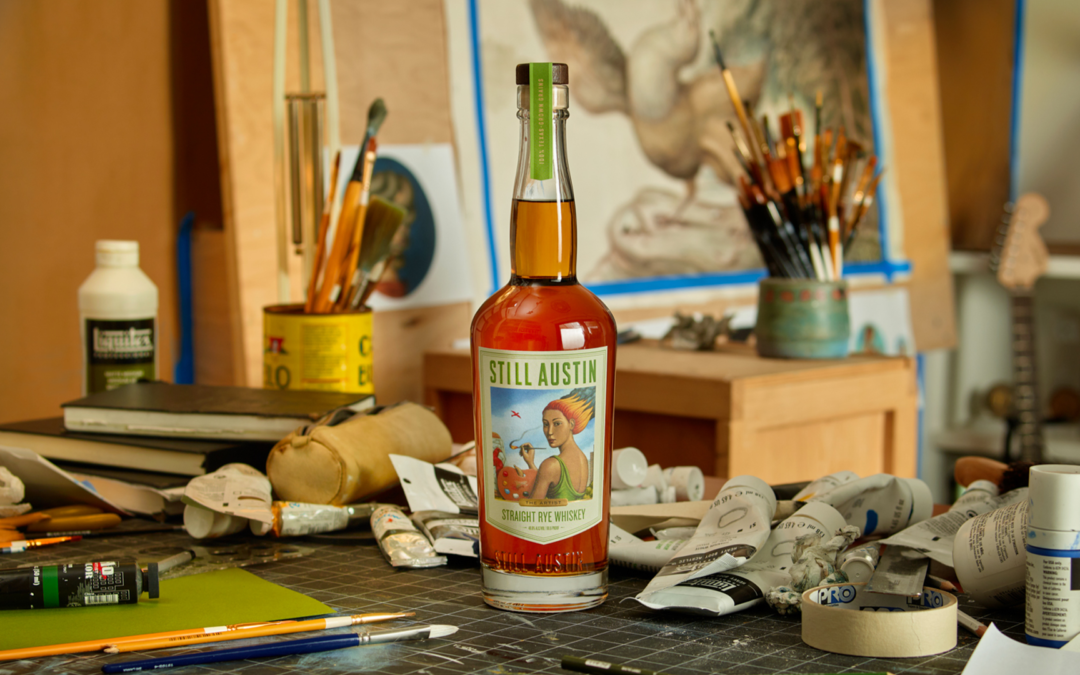 Austin, TX (October 10, 2022) – Two years ago, Still Austin Whiskey Co. launched its Straight Bourbon, affectionately known as “The Musician.” The flagship spirit took Texas by storm, becoming one of the fastest-selling spirits in the history of the Lone Star State—and winning Double Gold at the prestigious San Francisco World Spirits Competition. Now, the grain-to-glass distiller is proud to announce that “The Musician” has a new companion. Introducing “The Artist,” a 100% Straight Rye Whiskey made from Texas grains that’s dedicated to the dreamers, visionaries, and artists who have inspired the team.

Aged for at least two years and bottled at 99.6 proof (49.8% ABV), the new flagship rye whiskey represents the culmination of years of effort in which all the ingredients came together perfectly to create a work of art that feels, somehow, effortless. The spirit’s blushing, oaky hue foretells a complex nose, with hints of honey, cherries, fig, clove and coffee. The palate of spicy chocolate, apricot, sandalwood, ginger and caramel gives way to lingering after-impressions of cinnamon, molasses, nutmeg and orange zest.

“Our team put a lot of hard work and love into this release,” said Brandon Joldersma, Chief Operating Officer, Still Austin Whiskey Co. “We could not be more proud to bring another expression to life that represents the spirit of our city.”

The artwork on the label, created by internationally acclaimed artist and native Texan Marc Burckhardt, is the latest in the series of “archetypical” Austinites (e.g. The Musician, The Naturalist). Each provides a sense of the people who have influenced and inspired the team, while paying homage to the Texas terroir.

The Artist Straight Rye Whiskey is now available at the Still Austin distillery tasting room for the suggested retail price of $50.00 and will roll out to retailers throughout Texas, and online at Reserve Bar, in the coming weeks.

The Still Austin distilling team is led by Head Distiller John Schrepel, Master Blender Nancy Fraley and veteran Master Distiller Mike Delevante, one of the most experienced and respected distillers in North America who designed the distillery to make the highest quality whiskey. That includes a 42-foot custom-made column, “Nancy,” (and her sister copper-pot still, “The Queen”) which give the distillers serious creative license to create unique new flavors and spirits. For more information, visit www.stillaustin.com

Founded in 2015 by three Austin families, Still Austin Whiskey Co. is a true grain-to-glass distillery, located at 440 East St. Elmo Road in the heart of Austin, Texas. All spirits are hand crafted using grains grown by Texas farmers. Still Austin’s collection of spirits includes the flagship Straight Bourbon Whiskey (aka “The Musician”), Cask Strength Bourbon, Straight Rye Whiskey (aka “The Artist”), and American Gin (aka “The Naturalist”). Still Austin places a high value on sustainability, with a focus on cutting carbon emissions through local sourcing, increasing the biodiversity of the region through heritage grains, returning spent grains to local ranchers to feed their animals, and operating a distillery that is designed for energy efficiency and water conservation.