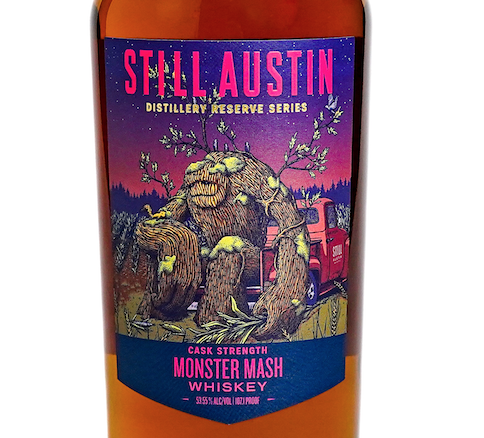 “At Still Austin, we don’t take ourselves too seriously and creating the Monster Mash expression was a whimsical way to celebrate Halloween,” said Schrepel. “Because this is such a limited-edition offering, we encourage folks to come to the distillery right at noon when we open on Halloween to purchase their bottle.”

The team only produced two single barrels of Monster Mash – about (500) 750ml bottles – which retail for $100 each. Bottles can only be purchased via the distillery’s Tasting Room beginning on Saturday, October 31 at 12:00pm. Those who purchase a bottle will receive a complimentary, limited-edition 12×16 poster of the Monster Mash label, signed by Austin-based artist Dan Grissom of “Biscuit Press.”There will also be a special Halloween surprise for those who come dressed in costume.

Additionally, the team is running an online contest which gives one lucky participant a chance to win a trip for (2) to Texas (specifically Austin, Dallas, Houston or San Antonio), and includes hotel (two nights), transportation and a $150 per diem for meals and incidentals. In order to qualify, folks must post a picture of themselves dressed in a Halloween costume to the Still Austin Facebook @StillATX or Instagram page @Still_ATX and use the hashtag #MonsterMashTrip. Still Austin will select and post five finalists to its social pages on November 5, and then allow its social community to vote on the grand prizewinner until 11:59pm CST that day. Limit one vote per person. The winner will be announced on November 6, 2020. Visit www.stillaustin.com for full contest rules.

The distilling team is led by Head Distiller John Schrepel, Master Blender Nancy Fraley and veteran Master Distiller Mike Delevante, one of the most experienced and respected distillers in North America who designed the Still Austin distillery to make the highest quality of bourbon. That includes a 42-foot custom-made column, “Nancy,” (and her sister copper-pot still, “The Queen”) which give the distillers serious creative license to create unique new flavors and spirits.The team also uses Texas weather to its advantage. The region’s high heat, humidity and rapidly shifting temperatures encourage spirits to move rapidly in and out of the oak barrels and mature relatively quickly—but, if this process is left unchecked, it can also cause the bourbon to have heavy oak flavor or harsh tannic qualities. To prevent this, Still Austin uses a meticulous six-month slow water reduction technique focused on flavor and balance, which gives the alcohol a softness on the palate and brings more “mature” notes, like vanilla and caramel, to the forefront. For more information, visit www.stillaustin.com